Among many drawings, some take a sculptural form while others are pages of a book. Some drawings are combined with photographic images and sculptures that mark the geography of the gallery floor, inscribing the movement of the hand, or another time wore by the body. This exhibition, with the works of Armanda Duarte (Praia do Ribatejo, Portugal, 1961) and Elisa Montessori (Genoa, Italy, 1931) consists of amoment when two artistic practices find a correspondence between gesturesand poetic constructions that indicate a surrender of the body and of the time it needsto materialize itself as a work of art. This idea of a possible meeting,does not allign to the format of a collective exhibition. Instead, it corresponds to the numerous open possibilities revealed by the works of the two artists, disclosed in a place drawn by their presence, by the austerity that these worksreveal and by the gestuality with which each artist contaminates the gallery. A space now inhabited by their works that sketched it with a plurality of sensationsand meanings.

In the entrance hall, an artist book by Elisa Montessori, entitled “Fogliee fiori ”, can be handled and traversed as a collection of memories containing natural elements, drawings and marks of its making. On the opposite wall, a pieceby Armanda Duarte, entitled “Desenho com modelo desconhecido”, stands on a plane (apparently a shelf – exactly as in the work “desenho com modelo:cotovelo”, placed in a lower position close to the floor. This design, almost an angled open membrane, rests on its very thin carton base and reveals a fine texture of the coal that accentuates the curvature of its abstract shape, without a reference model,as the title indicates, while the other has one: the elbow. Between the artist book and this drawing there a concurrence in terms of visuality, because the book can be leafed without having to follow a predetermined order, and the drawing / sculpture can be seen as an open leaf, with four faces, changing its shape according to the viewer’s position in the room. Another work resumes the relationship with the space, the grid that builds the black and white image with techniques such as drawing and photography, which develop a grid and the seriality replicated in each drawing becomes a sequence of images.

In the same way, in the second room, one of Montessori’s works, “Rupe e Cascata ”, a drawing with fold marks, executed with tempera and graphite and integrating a collage of an image, thus complexifying the represented landscape by connecting the poetic gesture and the photographic record. The idea of a representation of both the landscape and the corporeality, is present in the drawings with fold marks, as if they were written documents, folded in the shape of the hand that carries them; in this way encountering a proximity to the work of Armanda Duarte entitled “Juntos”. This piece, an installation consisting of boxes that can be moved in order to observe the drawings representing scientific elements of the morphology of snails (terrestrial gastropods) and some flaws in the square leaves.The action of these living beings, who inhabited the boxes during a determined period of time, is an integral part of the design, visible in the small open holes. The action of the artist on this work is based on a research on these animals that are the connecting link in to the construction of this sculpture / installation.

The practice of sculpture is also present in the drawings entitled “sobre meio caminho”. These are works that refer to a large installation that Armanda Duarte did some years ago in a natural park. Perhaps Elisa Montessori’s drawing entitled “Finestra pietra scritta” (in a free translation: written stone window), can accentuate the poetics of the space inhabited by the gesture and the presence of the body, as in the work “Paninho encardido”, a subtle cloth sculpture that in another time dressed a body. The language in the titles of both artists’ works, projects us towards another place, where each word is also a coordinate of the geography of this drawing that we, as spectators, are invited to build from the movements that the artworks generate in space. Perhaps as an organic process between stimulus and response, a kind of tropism, as said by Anne Marie Sauzeau regarding Elisa’s work. 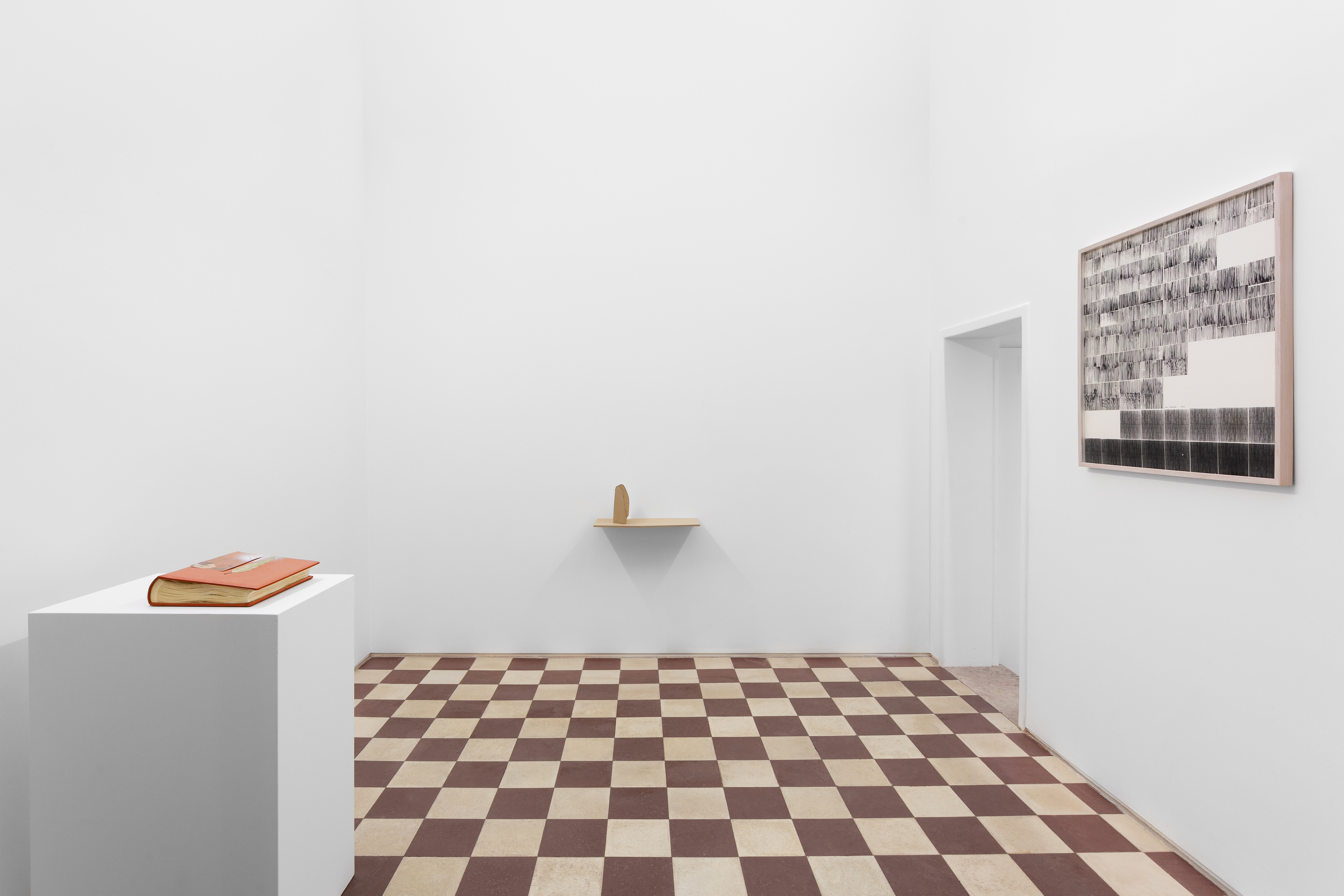 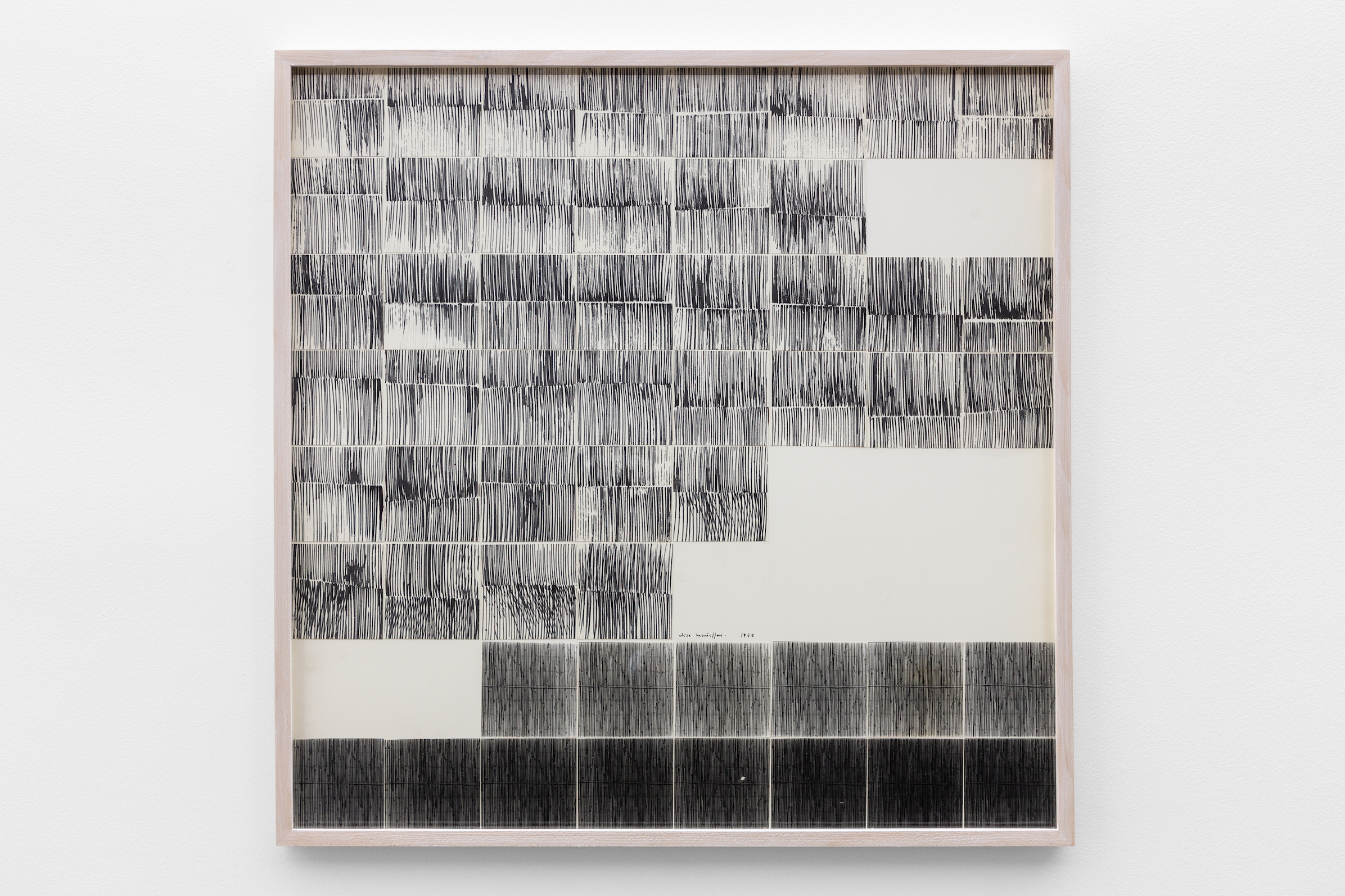 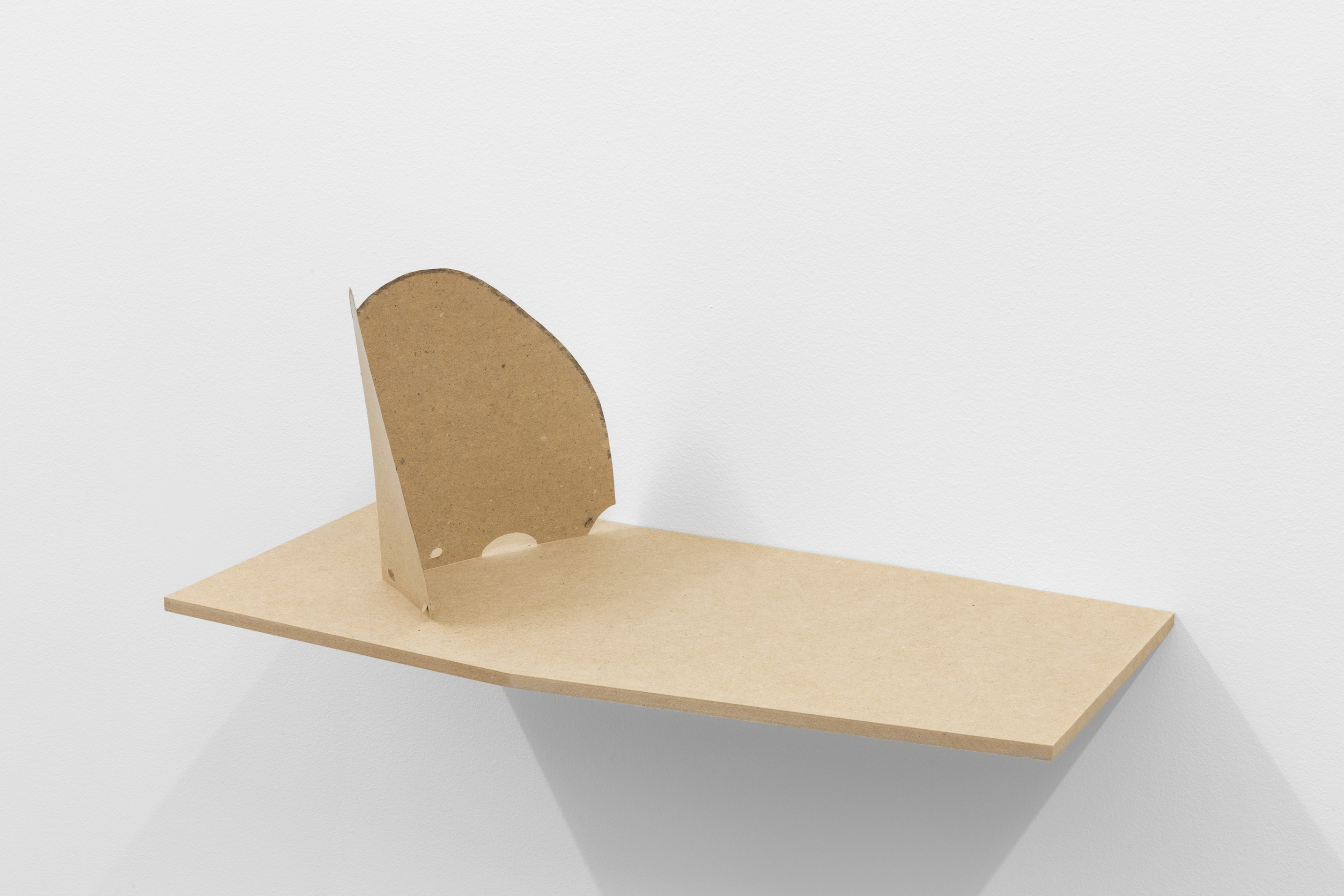 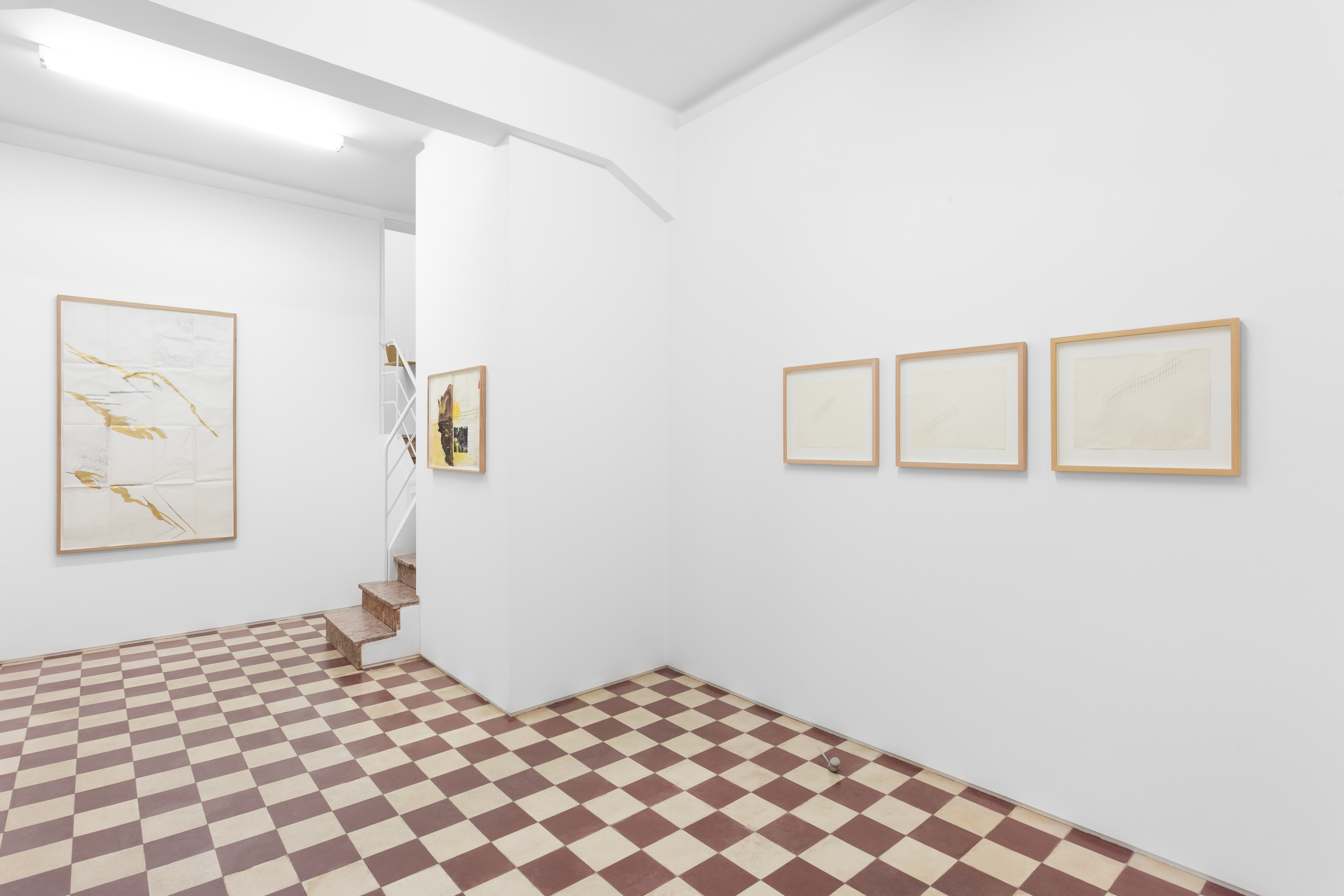 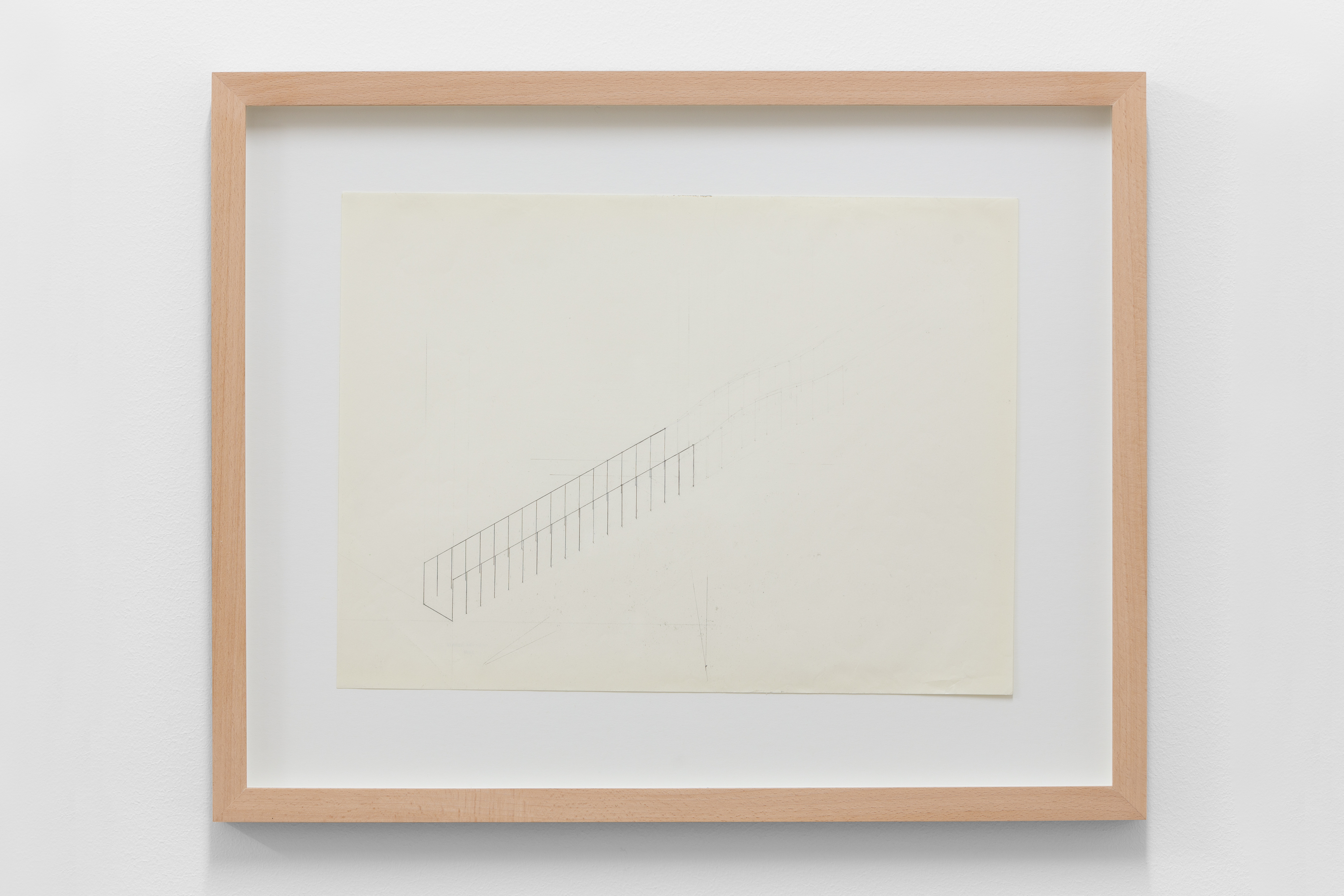 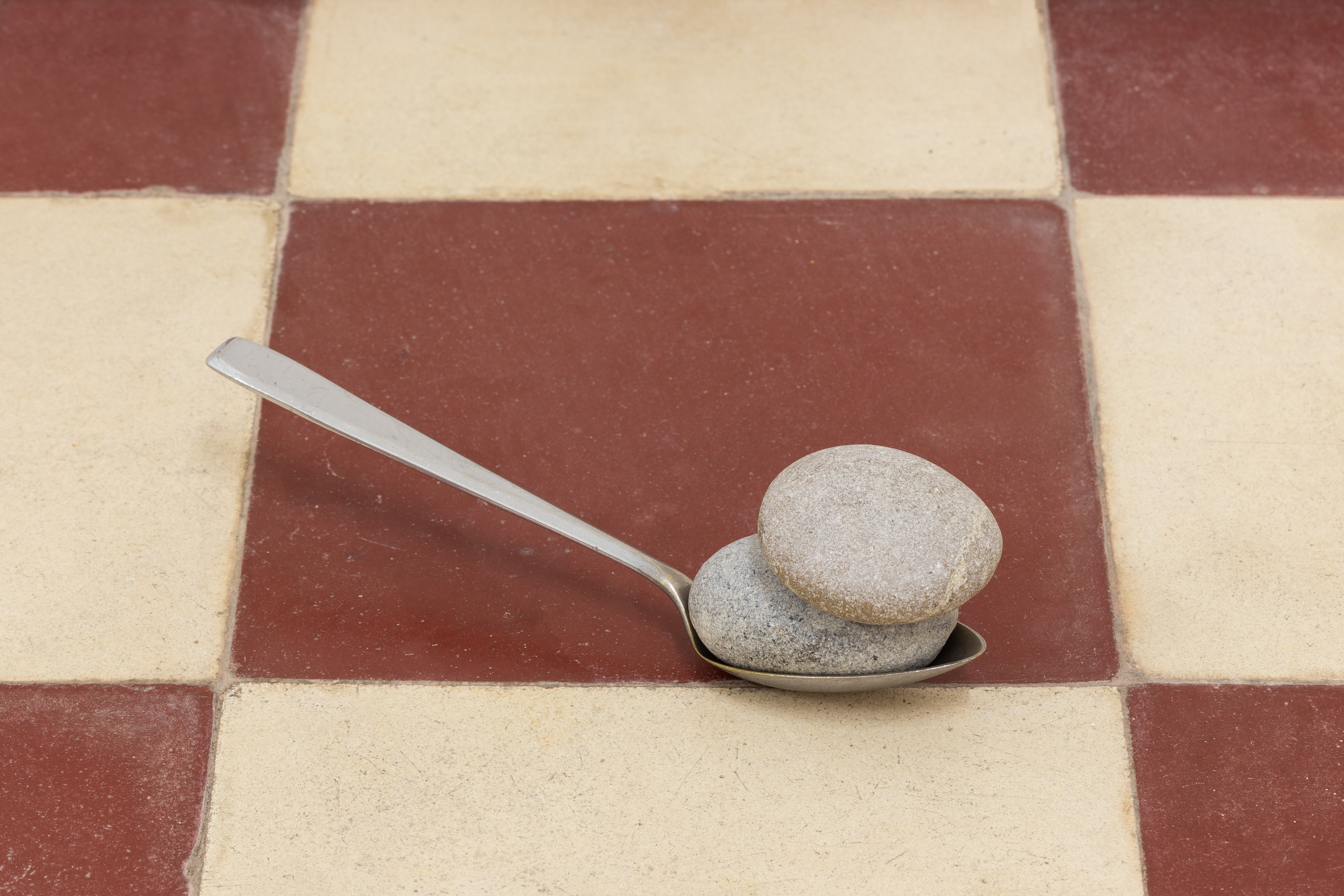 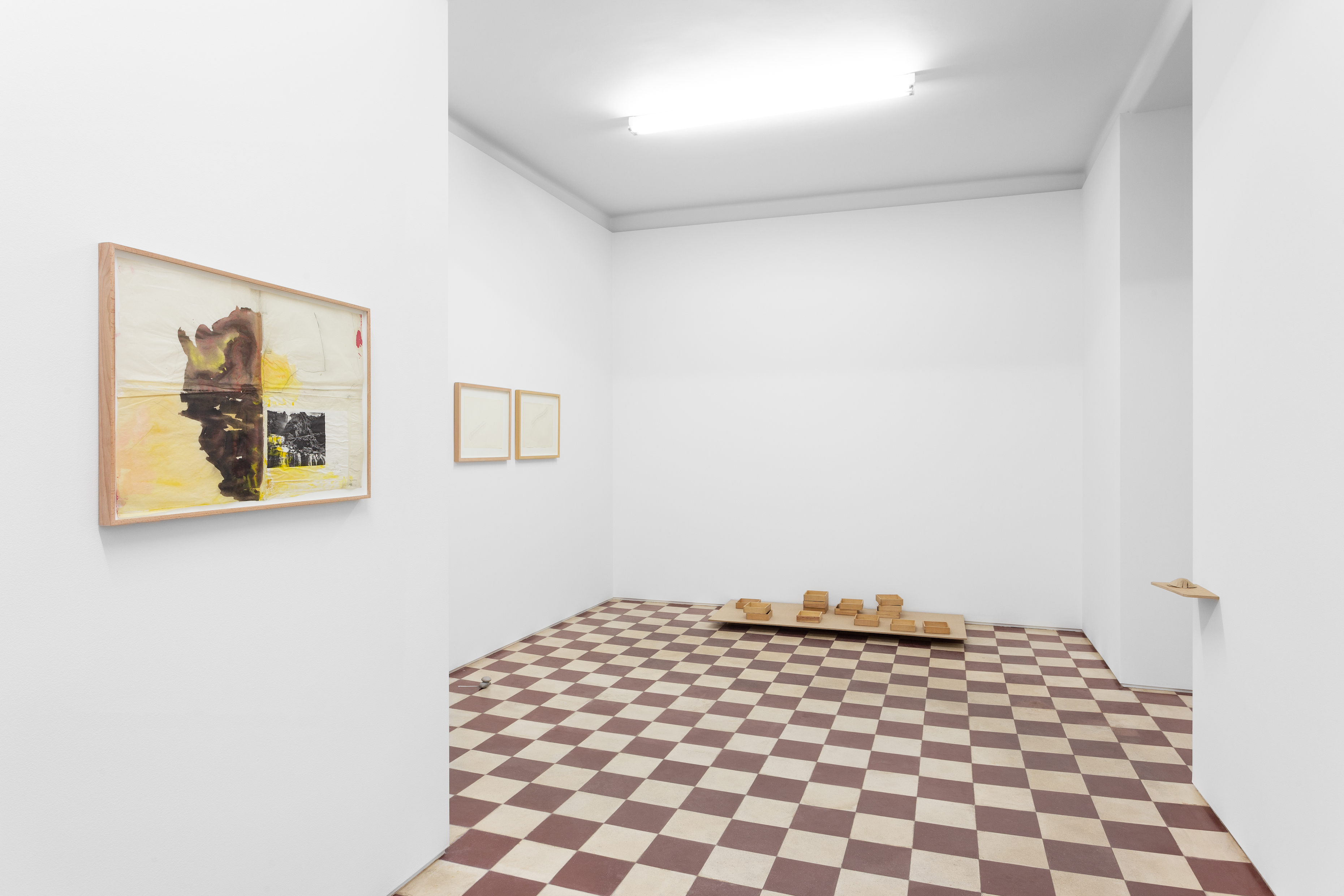 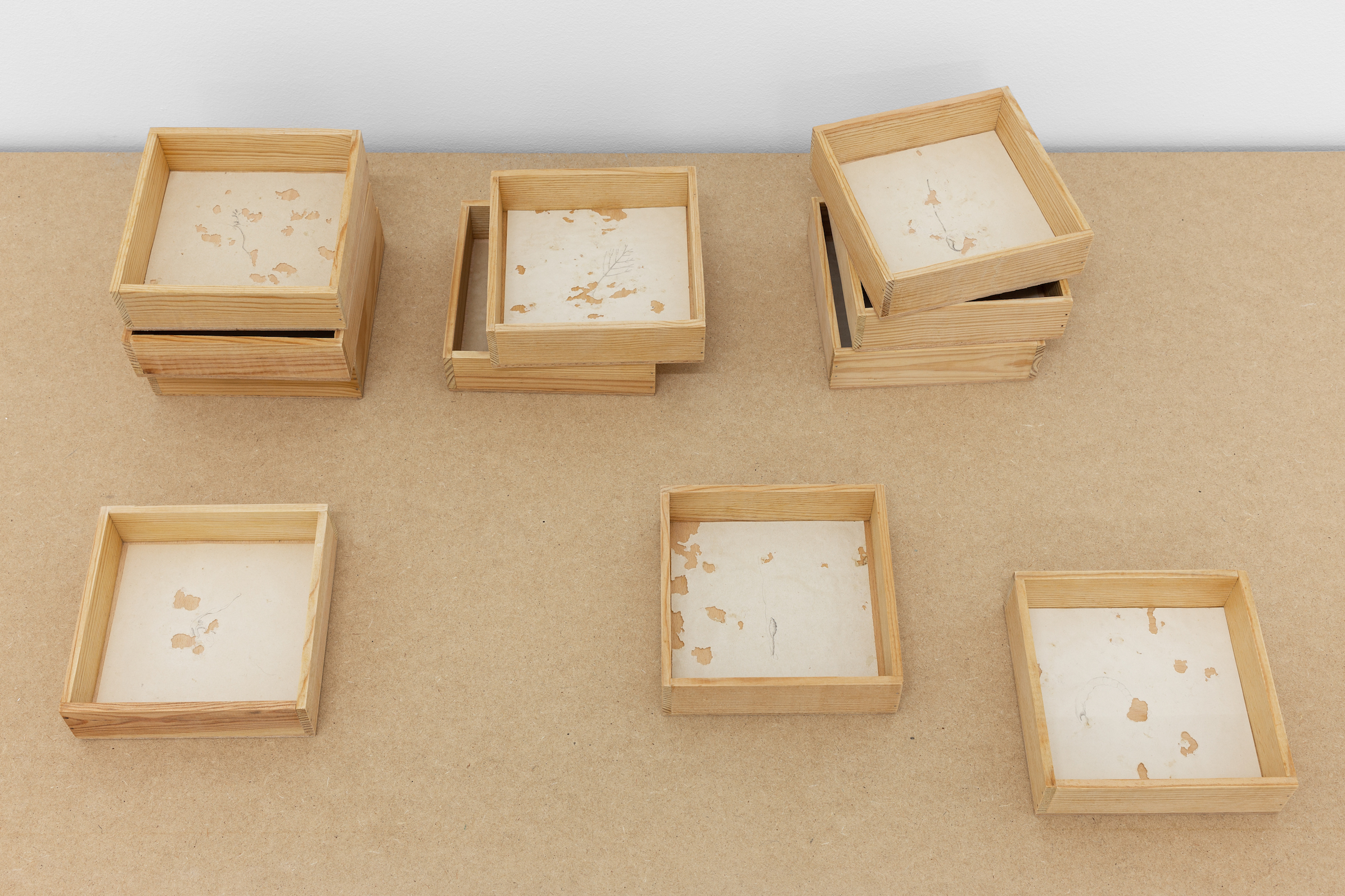 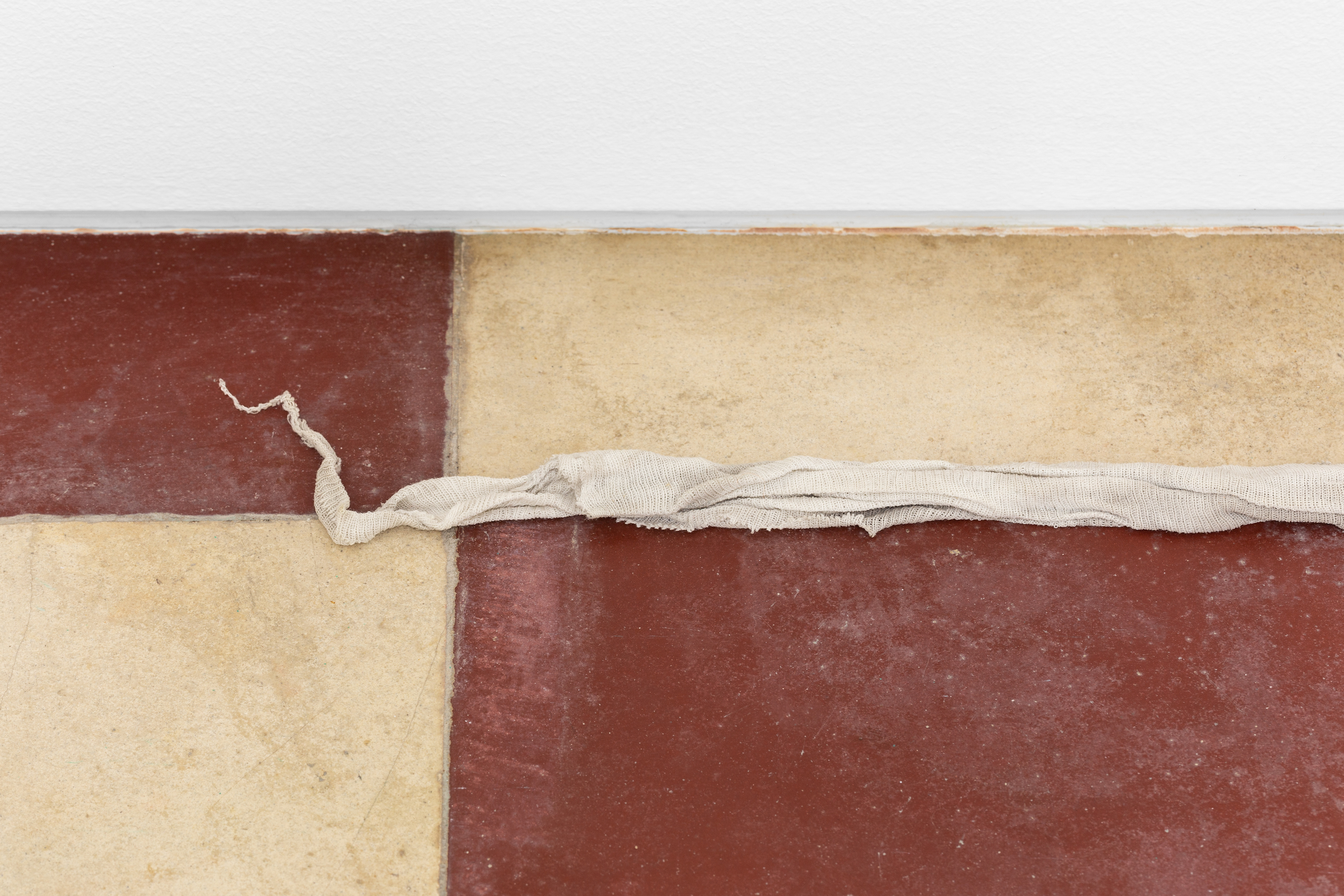 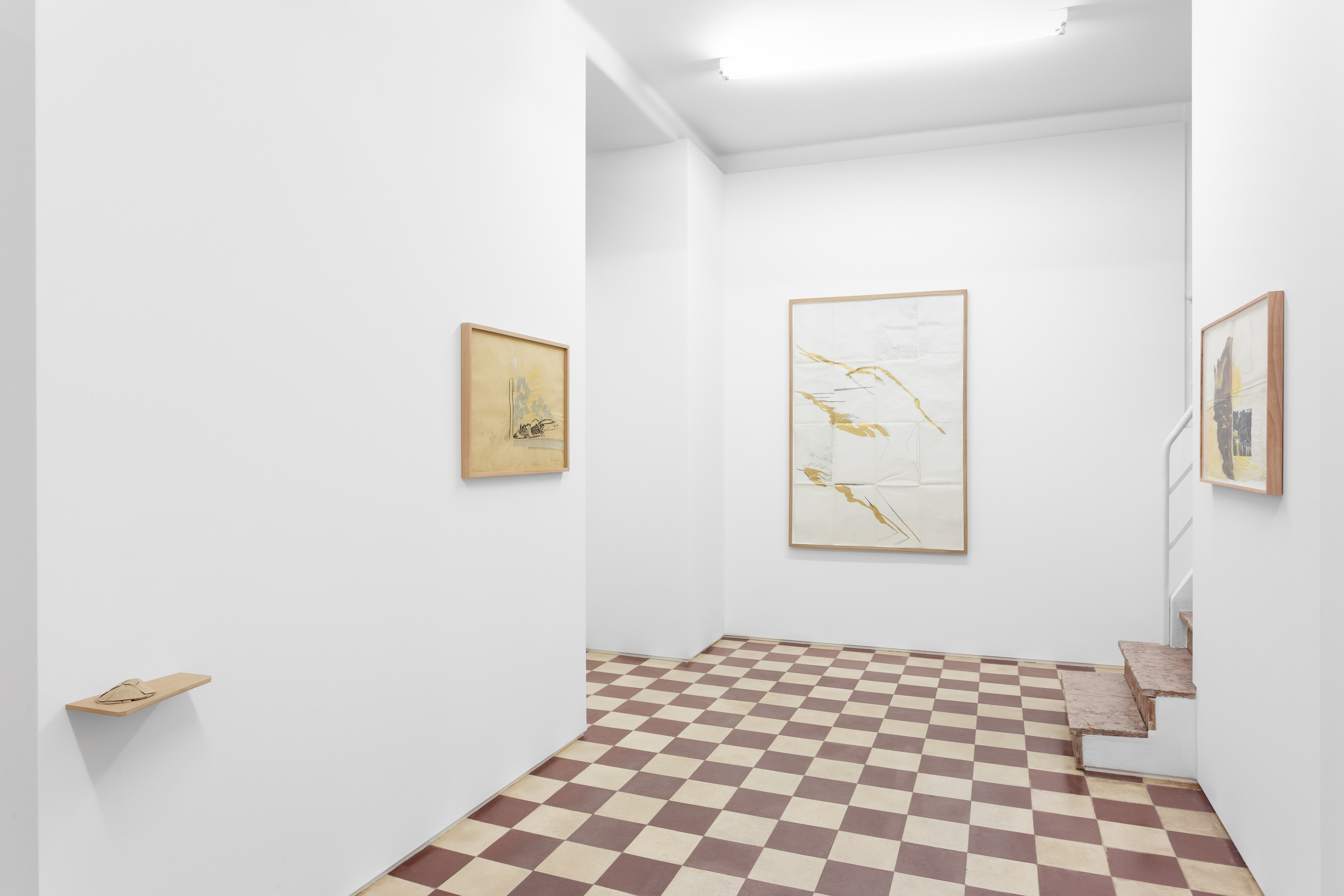