Monitor Studio’s summer program will be devoted to one of the gallery’s youngest artists, Tomaso De Luca. Over July and August the gallery space will become the artist’s studio and will be open for studio visits by appointment. Anyone interested in exploring this artist’s artistic research is most welcome and at the end of August there will be an official opening illustrating De Luca’s work during his residency period.

In his work Tomaso De Luca (born in Verona in 1988, lives and works in Milan) simultaneously employs different techniques and media, instituting a re-analysis of languages and nullifying the sense of security entailed by identity. Interested in observing things indirectly, De Luca creates visual hypertexts, where each element refers to a different time, space and connection. By replacing and substituting identities, the artist aims to free subjects and objects from their supposed functions in order to question their forms and relations.

Tomaso De Luca’s recent production has been focusing on architecture as a performative expedient. His choice of specific materials for conceiving his ‘architectures’ appears to be dictated by more than just functionality. Notwithstanding its provenance from a cultural sphere that by definition places the notion of comfort in high esteem, De Luca’s current research underlines the political and private dynamics that define materials. He aims to portray the body by exploring its relation with surfaces – progressively more functional, obedient, smart and comfortable – as if, after all, we are all somehow striving to be loved by objects.

In 1938 Le Corbusier painted eight murals on the walls of E.1027, the house Eileen Gray designed in 1926 for Jean Badovici and herself, in Cape Martin in southeastern France. One of the murals depicts three nude women — an allusion to Delacroix’s Les Femmes d’Alger dans leur appartment (1834). According to Le Corbuiser, however, the three figures actually represent Badovici (on the right), Gray (on the left), and, most strangely, “the outline of the head and the hairpiece of the sitting figure in the middle, he claimed, was the ‘desired child, which was never born.’” (1)

Intended as a gift by Le Corbusier, Gray and Badovici were deeply upset by the graffiti. At the outset a welcomed guest in their house, he had not asked permission to paint: he nonetheless made this mark, his violent signature, the trace of his intrusion, disrupting the functionality of the white walls (and so, one might say, that of Gray’s own creation). Why then portray Bodovici as a woman, and include in the composition the uncanny figure of an unborn baby? Is there an implicit attack on Eileen Gray’s open homosexuality?

After World War II, Le Corbusier built a wooden shack on the adjacent property, overlooking the house in Cape Martin, normally isolated and inaccessible, as if he wanted to spy on it. He would die in 1965, drowning in the Mediterranean sea, right next to E.1027.

Le Corbusier’s ghostly presence, inhabiting the walls of the private abode of Grey and Bodovici, suggests a will to dominate and to intrude. The guest has became the master of the house, establishing his own code of behavior. The architect obsessively enters the spaces, habits and lives of the two residents, puts himself in the middle — now the baby at the center of the mural has Le Corbusier’s wicked sneer — imposing a perverse love triangle.

Tomaso De Luca, drew and redrew Le Corbusier’s Three Women on yellow tracing paper, the same Le Corbusier employed for Les Femmes de la Casbah, and covered the walls of Monitor Studio, where he has set up his own studio for a period of two months. The artist, usually apt to mock arts’ predetermined structures and functions through his work, became an intruder himself in the space, stressing the brutality with which Le Corbusier acted out during his stay in Cape Martin. Frieze of the Intruder is both violent and humorous: the blue drawings on yellow paper nullify the weight of the walls, as much as they question the permanence of the mural by turning it into something fragile and impermanent. By repeating and dividing up the original mural, Tomaso De Luca not only aims to analyze Le Corbusier’s gesture, but also to expose a horrifying act of cannibalism, the colonization of private life, and the voyeuristic bent of Modern architecture. 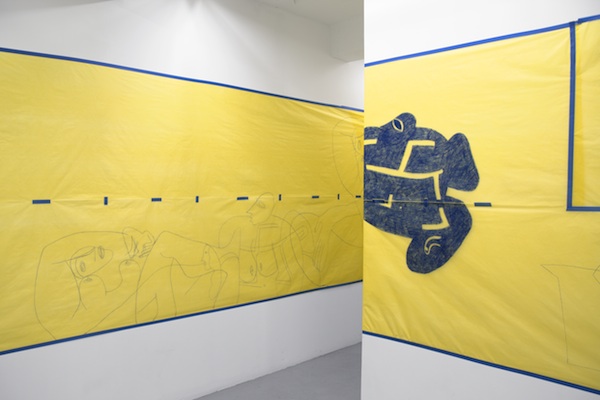 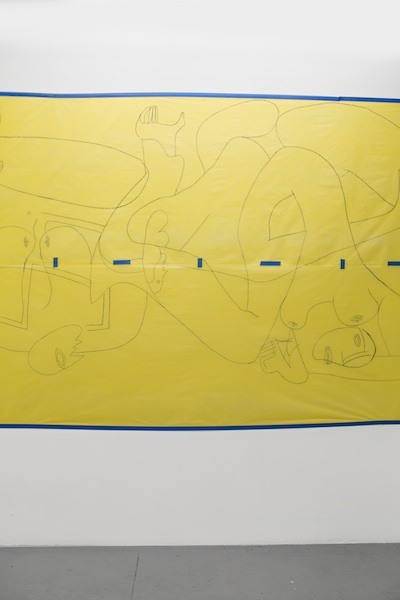 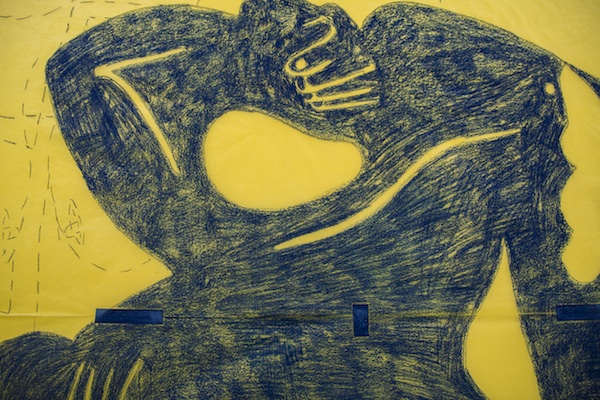